The Puppies Networking Brought Me

The Puppies Networking Brought Me

Networking is so much more than just going to meetings and shaking hands.
Much more than signing into Zoom, making sure you are on mute, and waiting your turn to talk.

Networking is the gateway to potential relationships and what they can create from that.

And in July, I was excited to welcome into my home 2 brand new puppies, Guinness and Harper.
Now, you might be wondering why I am talking to you about my dogs… I promise it comes around.

After losing Kalie, my 16-year-old Maltese, at the end of May, Rob and I decided a couple of weeks later that we were open to having another dog. I was hoping to rescue this time instead of purchase.
On June 10th, I made a post on Facebook sharing the kind of dogs that we wanted and hit send. 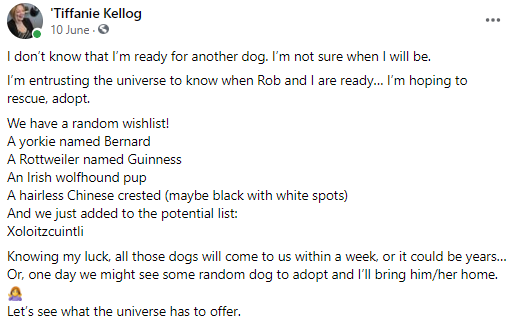 I don’t know that I’m ready for another dog. I’m not sure when I will be. I’m entrusting the universe to know when Rob and I are ready… I’m hoping to rescue, adopt. We have a random wishlist! A Yorkie named Bernard, a Rottweiler named Guinness, an Irish wolfhound pup, a hairless Chinese crested (maybe black with white spots), and we just added to the potential list: Xoloitzcuintli.

There were many people commenting on the love they have for their breed or the joys of a rescue.
And then, one of my connections, Robin, who I met through BNI a dozen years ago, commented. She asked, “And what about the puppies? Daniel and Brendi!”
Here were not one but 2 puppies, Yorkie mix, available and needing rescue. And the name Brendi is close to Benard (that is kind of a stretch). 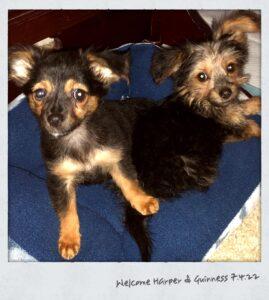 Guinness is a hard-core Promoter while we are waiting till Harper grows up a little more, as she is more of a chameleon of the behavioral styles. I am happy to say that it has been an amazing 3 weeks with them with us.

I wanted to share this story as I have been thinking this past July of the amazing relationships I have developed, over the past 20 years, mainly from networking.
I have met great referral partners and amazing clients, even more so are the friends and family that have been created.

Sometimes we have to look back and remember, and maybe even realized, the impact that people have had in our lives, beyond just business.

I would LOVE to hear your stories of what networking has created for you and your life!
Please, do reply to this post – I look forward to hearing your stories.